Like Indiana Jones and National Treasure before, Seekers follows two unlikely adventures who are set on a quest to find the lost continent of Atlantis after receiving an ancient tablet said to provide the clues to finding the lost world. The Seekers travel the globe looking to put together the clues and prevent the evil Clarius from getting there first.

Get behind the scenes footage, full episodes and more information at http://seekersofthelostworlds.tv

This weekend at the Harry Potter convention CONjuration, Brazenwench Productions, llc debuted the first ever minisode of Doctor Geek’s Moment of Science. The four and half minute video features Doctor Geek and DEUS-Ex as they show little Virginia what it means to apply your geekdom!

The season two finale is here, but don’t worry the moment has been prepared for. Amidst Professor Pedantic’s continued efforts to bend the Laboratory of Applied Geekdom to his will, Mister Flask concludes this season’s investigation into bionics. Can Doctor Geek regain command of the lab before all is lost? Note: This broadcast is audio only.

Brazen Wench’s own Debbie Viguié is at it again with another thrilling book release! This time co-authored with Urban Fantasy author James R. Tuck, Debbie and James give you Robin Hood like you’ve never seen him before in Robin Hood Demon’s Bane – Mark of the Black Arrow.

A vast darkness is spreading. If left unchecked, it will engulf the world, and so Richard the Lionheart must depart England on a holy mission. In his absence, the safety of the realm is entrusted to his brother, Prince John.

When the king departs, black sorcery begins to grip the land, threatening noble and peasant alike. Horrific creatures stalk the forests, yet the violence they commit pales when compared to the atrocities of men. A handful of rebels fight back, but are doomed to fail unless they can find a hero to lead them.

Every production company has their signature sting – from the robot running in the grass to the boy fishing off the moon. Now we have ours.

Brazen Wench Productions, LLC. executives JC and Rita De La Torre share their thoughts and hopes for the company in our first installment of Brazen Thoughts.

Join JC and Rita as we celebrate our 100th episode of Transmissions From Atlantis. From Doctor Who to the Walking Dead to Manos the Hands of Fate, we’ve had awesome interviews, segments and a ton of fun for the past 100 episodes. Friends and colleagues join us in the celebration.

END_OF_DOCUMENT_TOKEN_TO_BE_REPLACED

“The Rules is a must-read for fans of thrillers with truly frightening twists.”–School Library Journal

Narrated by an alternating unreliable group of teens, this dark thriller will have readers on the edge of their seats. No one is safe and everyone is a suspect. It’s Saw meets I Know What You Did Last Summer.

Junior Robin Brisset has no idea what she’s in for when she accepts an invitation to one of Callabrese High’s most exclusive parties. And when the trademark scavenger hunt begins, Robin must go against every rule she’s lived by to survive.

“Holder and Viguié keep the action churning along as they bounce from teen to teen for different perspectives on the action, sometimes recording a murder with appropriate gore, sometimes an escape.”–Kirkus

“Fans of the genre will be horrified, just the way they like it.”–Booklist

“A good mystery, THE RULES is a blockbuster horror film waiting to be made. This graphic story will find fans among horror aficionados, mystery fans, and those who enjoyed Heathers and other high school revenge tales.”–VOYA

The Rules is available for e-reader (Kindle/Nook), hard cover, Audible and Audio CD.

Brazen Wench Productions’ own Debbie Viguié, a New York Times Best Selling author, has launched her new writing program, Anyone Can Be A Writer. 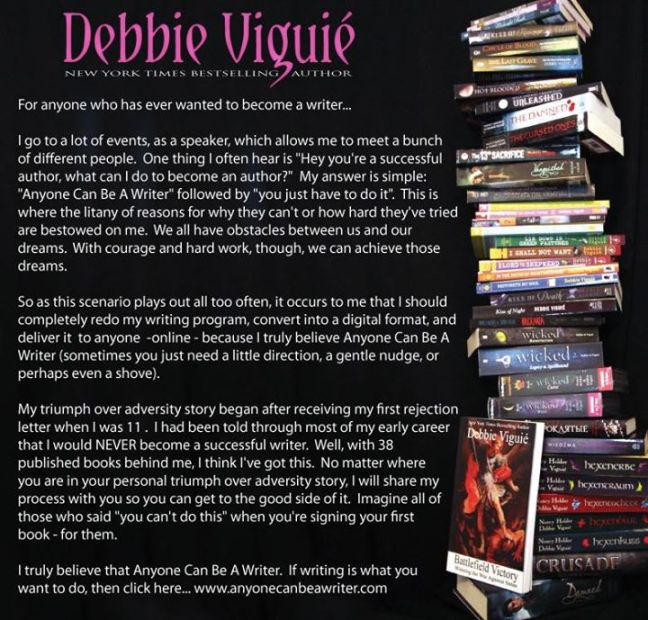 A comprehensive course that takes you from developing your story and characters to pitching your book to agents and publishers, Debbie gives you the tools you need to succeed in the rapidly changing publishing industry.

Learn more and watch some of Debbie’s videos at http://anyonecanbeawriter.com!

Brazen Wench Productions is proud to announce that our audio science from fiction dramedy, Doctor Geek’s Lab, is under consideration for a Geekie Award.

The Geekie Awards were created by Producer and content creator Kristen Neopak, a self described geek gal who was frustrated that Hollywood lacked an appropriate award show for Geek culture. Established in 2013, the Geekie Awards celebrates geek-genre content, art, games, fashion and more from all over the world.  The 2013/14 shows garned 2 Billion collective media impressions around the world.

Doctor Geek is nominated for the Podcasting Geekie Award.